The majority of patients with diabetic macular edema (DME), the most common cause of vision loss in working-age Americans, do not respond adequately to current therapies targeting VEGFA. Here, we show that expression of angiopoietin-like 4 (ANGPTL4), a HIF-1–regulated gene product, is increased in the eyes of diabetic mice and patients with DME. We observed that ANGPTL4 and VEGF act synergistically to destabilize the retinal vascular barrier. Interestingly, while ANGPTL4 modestly enhanced tyrosine phosphorylation of VEGF receptor 2, promotion of vascular permeability by ANGPTL4 was independent of this receptor. Instead, we found that ANGPTL4 binds directly to neuropilin 1 (NRP1) and NRP2 on endothelial cells (ECs), leading to rapid activation of the RhoA/ROCK signaling pathway and breakdown of EC-EC junctions. Treatment with a soluble fragment of NRP1 (sNRP1) prevented ANGPTL4 from binding to NRP1 and blocked ANGPTL4-induced activation of RhoA as well as EC permeability in vitro and retinal vascular leakage in diabetic animals in vivo. In addition, sNRP1 reduced the stimulation of EC permeability by aqueous fluid from patients with DME. Collectively, these data identify the ANGPTL4/NRP/RhoA pathway as a therapeutic target for the treatment of DME. 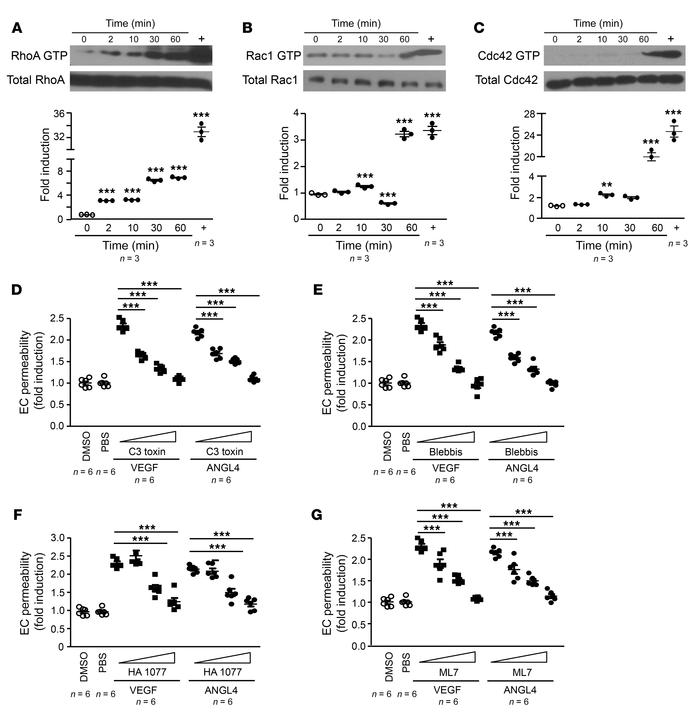